The Washington DC Fountain Pen Super Show bills itself as "the biggest pen show in the world."[1] So when I found myself with a free weekend, I had to go check it out. Now, the show technically runs Friday through Sunday, but is only officially open to the public on Saturday and Sunday, for an entry fee of $8 each day. However, you can buy a "Weekend Trader Pass" for $45 and get in through the whole weekend, which is what I did, even though I only went on Friday.

I have to say, the DC Pen Show wasn't quite what I was expecting, but then again, it was my first pen show, so I'm not quite sure what I was expecting. My experience with conferences and conventions tend to be more speaking-focused, as opposed to buying and selling-focused. As I learned this weekend, a pen show is much more like a gun show or something along those lines. While there was still plenty of face time with other enthusiasts and vendors, the show was definitely about buying and selling. Once I realized that, I had a much better time. 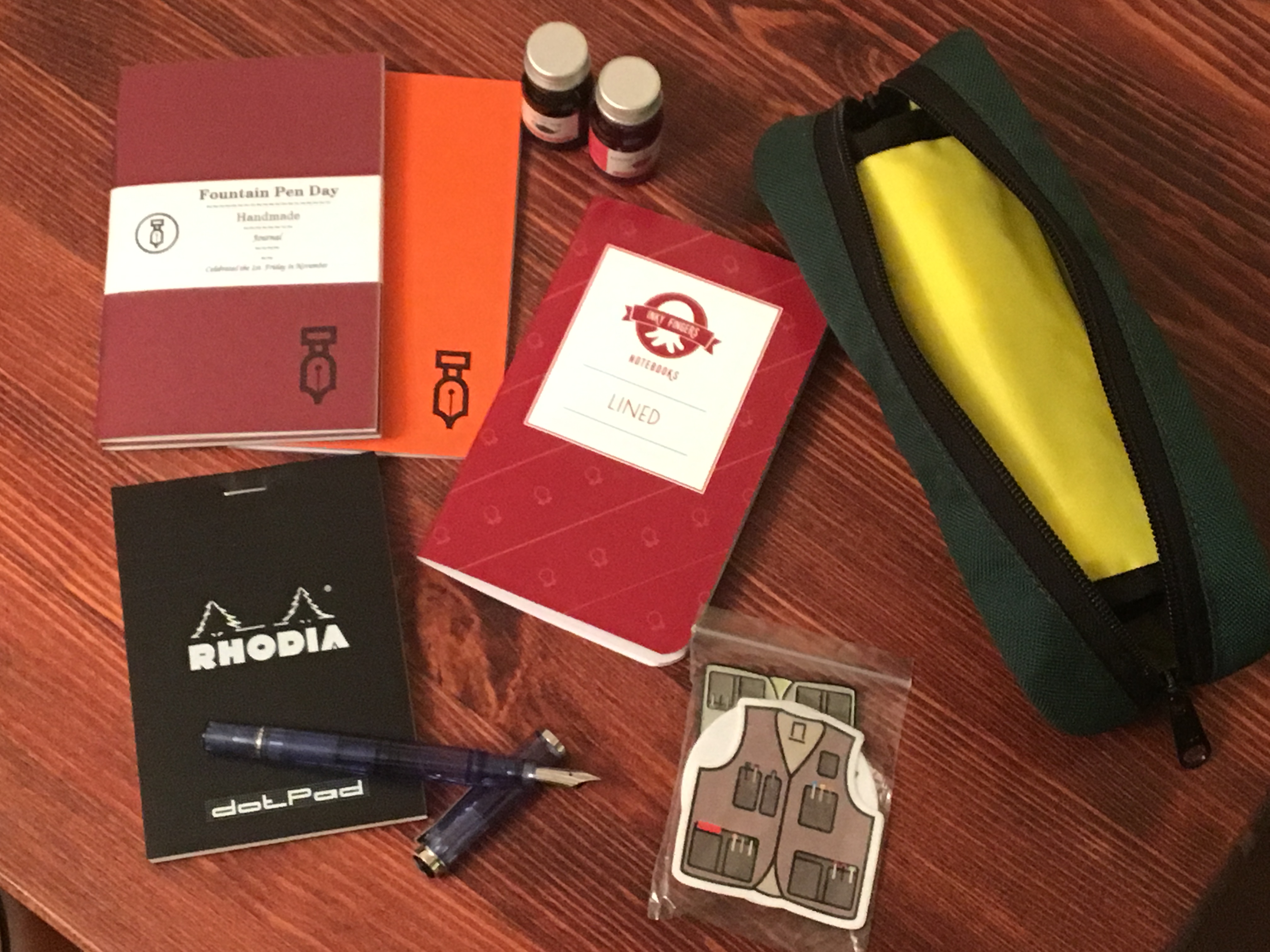 my haul from the DC Pen Show

Speaking of buying, buy I certainly did. I had listened to multiple Pen Addict episodes talk about having a list for your first pen show, taking your time, and walking around before you made any decisions. And surprisingly, I actually did that. I had a list of a few inks that my local store didn't carry, some paper, and maybe a pen case, and that was about it. Of course, once I got to the show, all that went out the window.

The beauty of a pen show is that you can try pretty much anything. If it's out on a table, as long as you ask, you can pick up and try out all sorts of pens, from cheap pens up to pens worth thousands of dollars. Or you can spend some time at the amazing ink testing table and play around with all sorts of gorgeous inks. And when you decide that you want to buy stuff (and you will), you can talk to vendors face to face to help find something that you like. 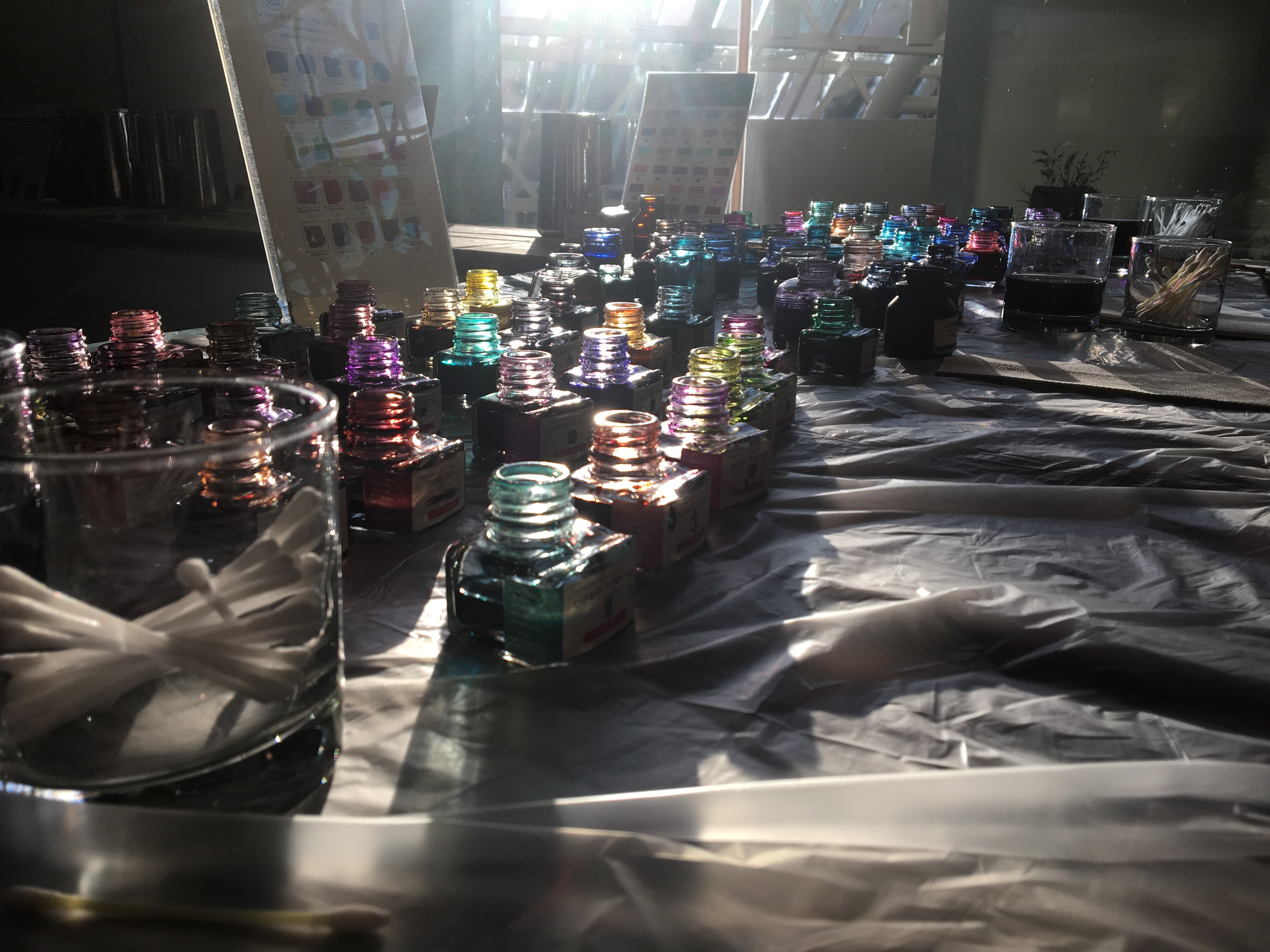 Once the shopping was done for the day, that's when the real fun of the show started, at least for me. On Friday night, Brad from Pen Addict and Cary from Fountain Pen Day put together a great little get together/meetup in one of the meeting rooms of the hotel with all sorts of giveaways, drinks, and snacks. It was there that the fountain pen community really came to life for me. Even though I knew absolutely no one at the show when I got there, by the time I left, I had met other fountain pen enthusiasts from here in Maryland that I'll keep in touch with, and won a sweet Nock Co. Brasstown Pen Roll from the door prize giveaway.

So would I go again? Absolutely. And I'd probably keep the same strategy as well: go on Friday, hang out until late, and then head back home. I might consider coming back on Sunday next year, if there was anything that I missed picking up on Friday, but I found that one full day of shopping was plenty (and my bank account agrees.) That way, I avoid the crowds, and get to take my time and talk to people. I'll also probably have a slightly higher budget next time around to hit up some of the custom pen manufacturers like Franklin-Cristoph. But I'll definitely be back next year.