The first week of October, my wife and I got back from an incredible vacation. Thanks to an overabundance of airline miles, we were able to fly out to Ireland for ten days, which my wife wanted to do for her graduation present. We spent a few days in Dublin, and then headed out to Galway for a few days, then back to Dublin for our flight out. It was a fantastic trip, and Ireland is a gorgeous place. I thought I'd do a quick write-up of some of the things we did and saw while we were there in case anyone else was looking at going.

First things first, just be aware that if you're traveling on airline miles, you might have to take a slightly indirect route to wherever you're going. Coming back to the US for us led to a 6 hour layover in JFK, and then on to Charlotte for a few hours, then finally back to Baltimore. But such is life.

As far as getting around Ireland, we learned a few things really quickly. First, be prepared to walk. A lot. Thanks to my Fitbit, I was able to see that on our lightest day, we still walked almost 6 miles. Good shoes were a must. While we were walking, I found another Fitbit that must not have been able to cope.

Alternatively, learn to use the bus system. We rode the bus a few times, and it was fairly agreeable. The only challenge was figuring out which bus went where and so on. Expect some waiting around if you choose to take the bus, however. I think the longest wait we saw was about half an hour.

Now, we rented a car for our trip from Dublin to Galway, but if we had to do it over again, I don't think we would. While some guide books and the like recommend renting a car, in the last few years the M6 has been built which provides a straight highway shot from Dublin to Galway. And as we know from Planes, Trains, And Automobiles, "Don't see nothing on the interstate but interstate." We could have saved a lot of money by taking one of the plethora of buses that run between the two cities, or taking the train. At least driving on the "wrong" side of the road was fun.

First things first: if you go to Ireland, stay in a bed and breakfast. There are big hotels here and there, but from our experience, there really wasn't any need to stay in one of them. We did have some varying degrees of quality amongst the BnBs, but we would definitely go that route again. (If you find yourself out in Galway, do yourself a favor and stay at the Claremont House. Anne was a total sweetheart, and definitely baked us fresh scones every morning. Amazing.)

Location is something to keep in mind when you're booking, though. When we were in Dublin, we stayed about a 10min walk south of St. Stephen's Green, which made for a bit of a hike if we wanted to get into the city center area. Likewise in Galway, we were a bit of a hike from Galway proper, but the great accommodations there were well worth it. Just something to keep in mind. 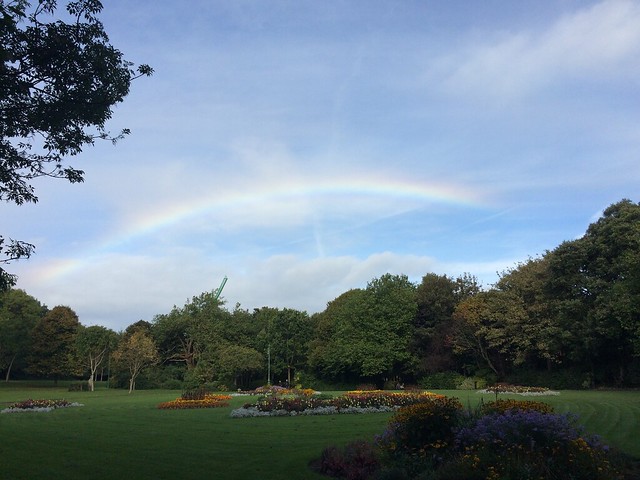 Next post I'll go over the things we did while we were there, and obviously more pictures as well. In the meantime, all of the pictures from our trip are in a flickr album.