When Workflow launched, I quickly downloaded it after seeing the review on MacStories. It seemed like an incredibly powerful tool that would allow me to automate my life, or so I thought. I downloaded it, made one or two workflows that I used to collect stories for the podcast, but that was about as far as it went. It ended up being nothing more than a neat little idea to me, and I didn't really play with it much more.

But lately, I've been revisiting Workflow, and I've really discovered how incredibly valuable of a tool it can be. I had to rediscover Workflow and figure out how to make it work for me. What I found was that instead of forcing myself to sit down and figure out something that I needed to automate, I let things come to me whenever I hit a repetitive task in my activities on either the iPhone or the iPad.

One of the things that I've found Workflow is great for is making up for other apps' shortcomings or questionable design decisions. Take the Medium app, for example. There was a time when the built in share sheet added a frustrating little "Shared from Medium" or something along those lines when sharing via iMessage. So I wrote a workflow to simply grab the base link and prompt me for a phone number instead, avoiding all of the additional sharing that Medium was doing. (They've since fixed that.) Here's a link to the workflow. 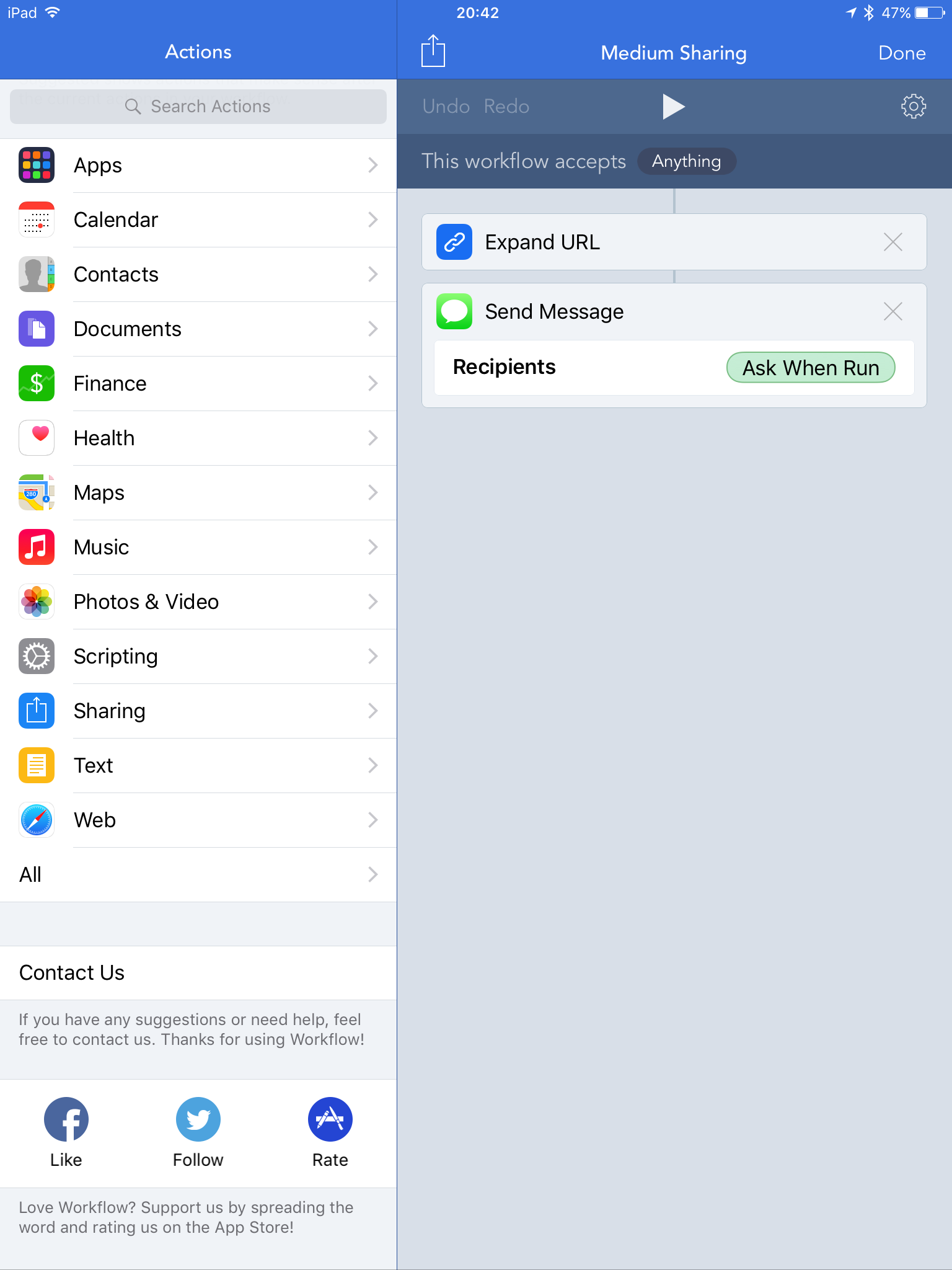 Another workflow that I use now takes advantage of the fantastic 2Do integration in Workflow. When I play bass for my church, I found myself remaking a number of the same to-dos to remind myself to print out chord charts and the like whenever I was put on the schedule. If I'm also band leading, I had another set of to-dos that I would want in my to-do list. So I wrote a Workflow to create all of those tasks for me, and it asks whether I'm just playing or also band leading, and creates the number of tasks based on my response and the dates I input. Here's a link to the workflow.

A big part of the usefulness that I've found in Workflow comes from a better understanding of the "Scripting" section of the Workflow Actions. It is still daunting, and it definitely requires a good deal of trial and error, but that's not necessarily a bad thing, because it challenges me to keep learning. For example, when working on that band workflow, I discovered the "Choose from Menu" Action. "Choose from Menu" acts as a sort of if/else block by prompting you for input, then running the section that corresponds to your choice. This was kind of a breakthrough action for me, since it let me easily create more variability in my workflows.

And the best part is that I know that I'm just scratching the surface of Workflow. I'm amazed at the intricacy and creativity of the work that people like Federico from MacStories and Jordan Merrick are putting together, and the Workflow community on Reddit constantly puts together some incredible workflows quickly if people have questions, and it inspires me as well.

If I had a single piece of advice for when working in Workflow, it's to take things one step at a time. While trying to write a giant single workflow that "automates your life" might seem like a great idea at first, the power of Workflow comes from fulfilling specific needs for you.

I've had Workflow installed for months and I'm still figuring out all the ways it can work for me, and I'm ok with that. It's not often that an app comes along and gets me rethinking my entire workflow, but Workflow has done just that, and it just keep getting better as time goes on.