After my running post at the end of last year, my friend Adam suggested that if I was going to get more serious about my running, I should look into a more robust run tracking app than Apple's built in Activity app. I knew he was right; while Activity.app is fine for simple tracking, it has no GPS support built in, and its cues can be a little lacking. So I decided I'd take a look around the App Store and see what I could find. What I found was that there isn't really a strong, stand out running app on the App Store. Instead, each app that I found had its own strengths and weaknesses, so I decided to try out a few to see what worked the best for me.

I didn't have a whole lot of requirements going in to the process of picking an app, only a few major things stuck out at me:

When I looked around at the apps available to me, the main contenders were pretty obvious based on things like community support, active development, and the like:

I decided that I'd try each app for a week-ish. I started with Runkeeper simply because I had downloaded it a while back anyway, and I was looking at two main tests:

The Outdoor Test was pretty simple: I don't like to use headphones when I run outside, so I simply wanted to check how the app handled GPS tracking, if it could call out paces at intervals, and most importantly, take the data at the end of the run and update my Activity rings. I've been working on getting more acclimated to hills and the cold weather before training anyway, so this worked out nicely.

I went into this expecting there to actually be an indoor test, but frankly, none of the apps that I tried worked nicely with the treadmill. At best, they had a place that I could manually input my run stats, but none of the apps seemed to deal well with not being able to use GPS tracking.

A Note on UIs

Frankly, all of the UIs for these apps weren't great. Strava had the best of the three, and MapMyRun had the absolute worst of the lot (more on that later). Frankly, I don't get why it's so hard to have a running app with a decent interface. And when I say decent, all I'm asking for is not horrifically cluttered and easy to navigate. I'm not expecting Apple Design Award winners necessarily, just something that's pretty usable. 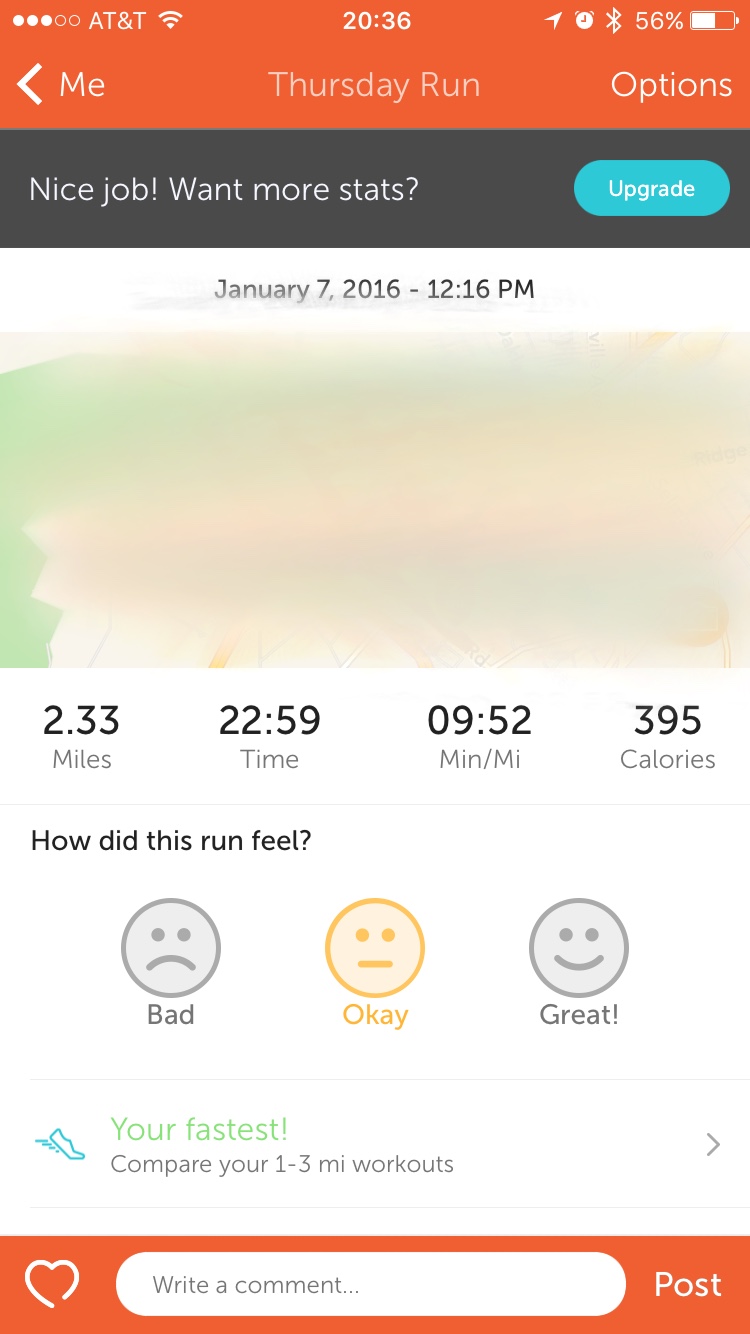 Runkeeper was the first app that I tried out of the three, and it was ok. Not great, not terrible, just ok. On the outdoor tests, I really enjoyed using it, actually. The mid-run tracking was good, pace accuracy was good, and the interval call outs were every 5 minutes if you started the run from the Watch. An interesting note was that the call outs used the iPhone's ringer volume, instead of the speaker volume, which ensured that I had no problems hearing when wearing my phone on my arm.

The main screen of the app was probably the best of the bunch, since it starts you ready to run as soon as you launch, and I liked that. You can manually log runs straight from the main screen as well, so that's a plus.

One quirk that I did notice was that Runkeeper pretty consistently miscounted my calories burned compared to Health.app. And it wasn't just a few calories, either, generally close to 100 extra calories burned per run. I'm not sure if that was just tracking some sort of base + active or something along those lines, but it was a point to note. 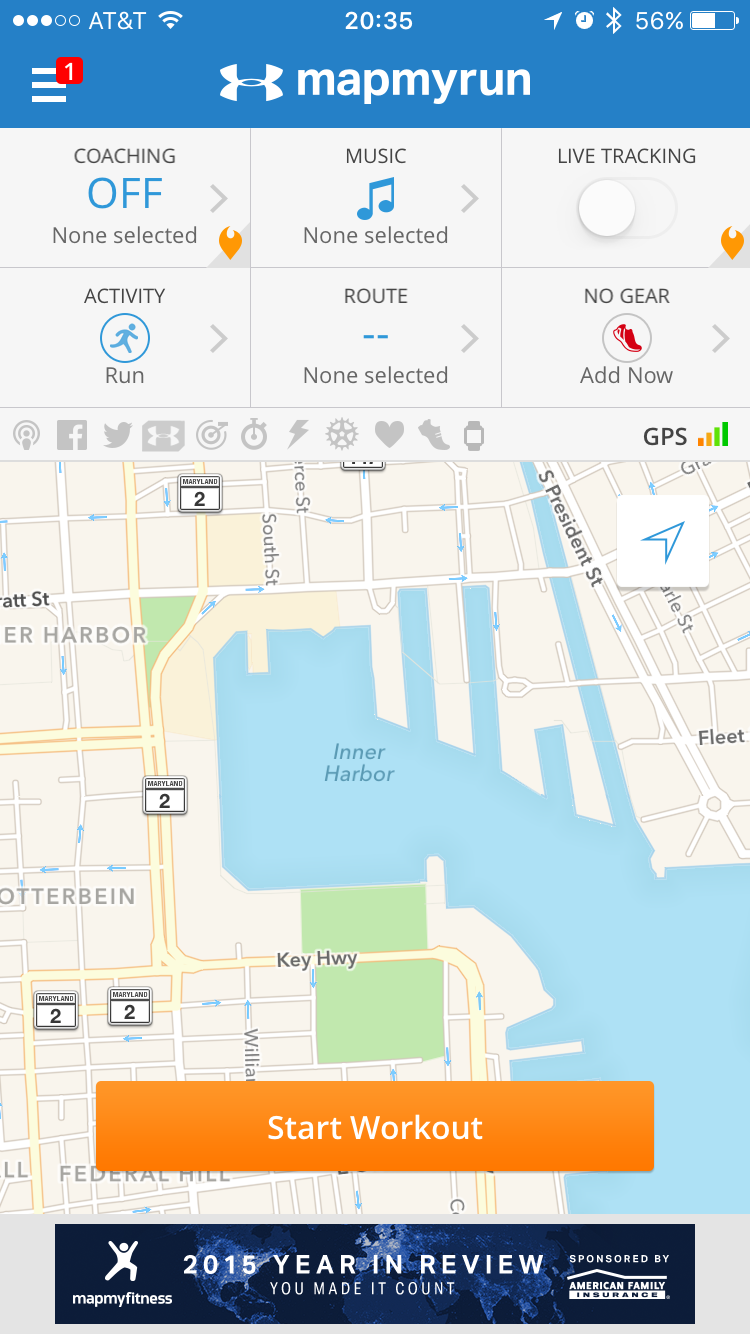 Sadly, MapMyRun was dead before I even left my house. I never even tracked a run with it for a few reasons. First, it was, without a doubt, the spammiest of the three apps that I tried. All of the apps required an email to sign up, but MapMyRun emailed me multiple times per day for the first few days. Additionally, it also sent an iOS notification to set up my running goals...at 11:40pm.

MapMyRun had the absolute worst UI out of the three apps that I tried by a long shot. I'm not even sure what's going on on this main screen. There are bits that seem clickable but aren't unless you subscribe to their service, and there is that strange bar that doesn't look clickable but is. The ads right on the main screen and in the menu are also pretty awful as well.

But what really killed MapMyRun is that it still has not updated for WatchOS 2. That means not only can the app not easily access the workout data, but it also can't access some of the sensors on the Apple Watch, like the heart rate sensor. MapMyrun doesn't display pace when you are running, and it can't stay on the screen when you do start a run. On first launch, the app actually suggests that you go in and change your wrist raise settings simply to use the app. For a company the size of MapMyRun/Under Armour, that's just embarrassing. 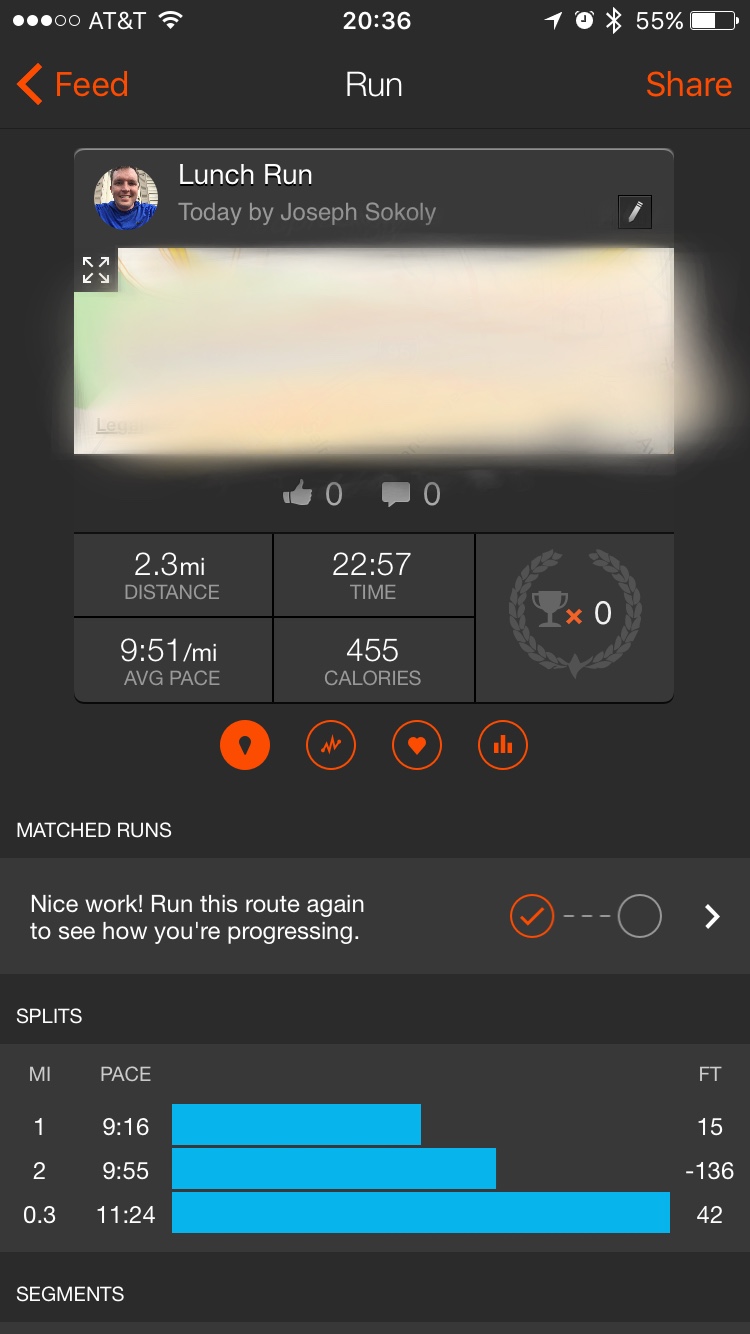 Strava caught me off guard when working on these reviews. I came into these expecting that Strava would just be a data point in my reviews, but I think it will end up being the app that I go with going forward. Strava has an excellent Watch app, a pretty good interface for getting runs started, and a good balance of free versus premium features.

The UI can be a little difficult to navigate; there are a lot of buttons that aren't labeled, so a little trial and error is necessary to figure out where everything is. However, once I had a handle on where everything hid, it made sense.

So I think I'll be sticking with Strava for the foreseeable future. That may change when I start running with my running group in the next week, but Strava hits all the requirements I had: great Apple Watch support and a good looking app. I'm a little disappointed that I have to give up good treadmill support, but who knows, I might just be missing something. In the mean time, I'll just keep tracking treadmill runs in Activity.app and manually importing them to Strava so that I have a record in one place.