So imagine my surprise when I was handed a pocket notebook at the Baltimore Pelikan Hub from a brand I had never heard of. I was doubly surprised to find out that not only was the notebook a good pocket notebook, but it turned out to be great with fountain pens!

That notebook is the Eccolo “Penny for your Thoughts” notebook. Made in China, information on this notebook is incredibly sparse, by which I mean I couldn’t find anything about it. Eccolo’s website shows that they’re a pretty prolific manufacturing company that makes everything from picture frames to coffee mugs, as well as a pretty wide range of notebooks. Most of their lineup seems like the sort of thing that you’d find in the rows of Target or Michael’s. Unfortunately, I wasn’t able to find this specific model of notebook, which wasn’t overly surprising. This reminds me of the Our Story Begins notebook, where it’s just a short run model in a line.

Which is a bit of a shame, because the Penny for your Thoughts is a nice little notebook. 32 sewn-bound pages are covered by a simple kraft stock cover. The form factor is just a little shorter than a Field Notes notebook, measuring 5.25” tall by 3.5” wide. The stitch along the spine started to come undone before I started using the notebook, but never unraveled all the way. I did appreciate that you could see where the ends of the spine thread had been fused to prevent further fraying. A fun little touch.

As for the paper itself, I was hugely impressed by how this seemingly cheap notebook performed. The notebook I received was lined with nice, dark lines on a cream-colored paper, with no other notable features inside. Much like the Our Story Begins notebook, I’d describe the paper’s texture as “loose”. Not in a bad way, but it’s definitely a texture that I’ve only found in these Chinese-made notebooks. When I felt the paper, I didn’t expect good things, but I was quickly proved wrong. Inks look great, with plenty of shading and a bit of sheen here and there. I did find a bit of picking through to the back side of the page with some of the really wet pens, but otherwise this notebook took fountain pens like a champ. Pencils performed nicely as well, with some minor smearing on the softer cores, but that was to be expected. 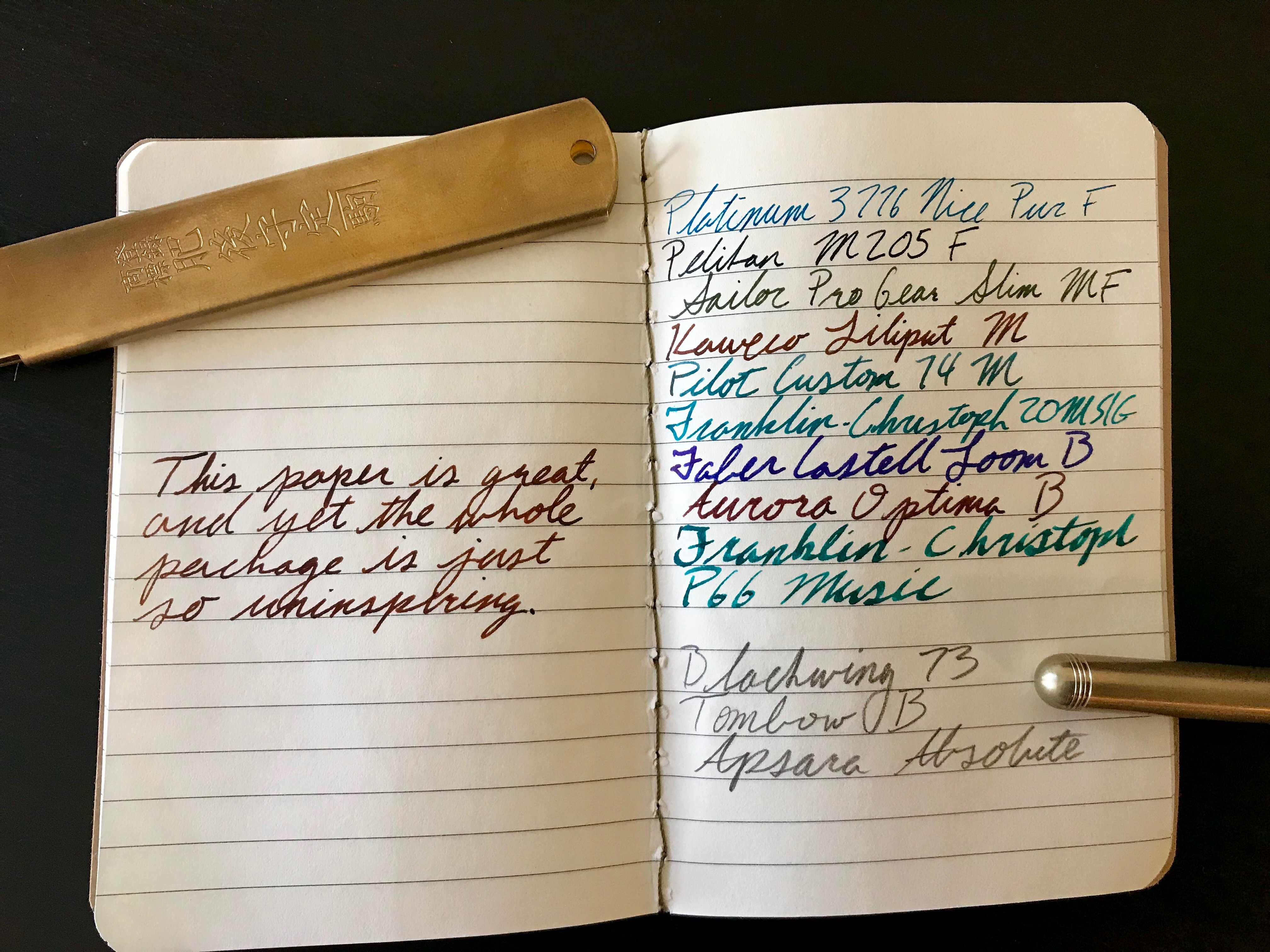 Check out the sheen around the m in Custom

And yet, after a few weeks of carrying this notebook in my pocket, I found that I was really bored with it. Perhaps I’ve been spoiled by my Write, Story Supply Co, and Nock notebooks, but despite the pretty good paper, this just isn’t an attractive notebook. When I use my stationery, I want to be delighted. I want to smile a little at the small details, or at the careful craftsmanship. This notebook just doesn’t have that, and just pretty good paper isn’t enough for me anymore. So this notebook will enjoy an early toss back into the box, an oddity for the collection. That’ll be one penny.